An international team anchored by the Event Horizon Telescope (EHT) Collaboration, which is known for capturing the first image of a black hole in the galaxy Messier 87, has now imaged the heart of the nearby radio galaxy Centaurus A in unprecedented detail. The astronomers pinpoint the location of the central supermassive black hole and reveal how a gigantic jet is being born. Most remarkably, only the outer edges of the jet seem to emit radiation, which challenges our theoretical models of jets. This work, led by Michael Janssen from the Max Planck Institute for Radio Astronomy in Bonn and Radboud University Nijmegen is published in Nature Astronomy on 19th July, 2021. 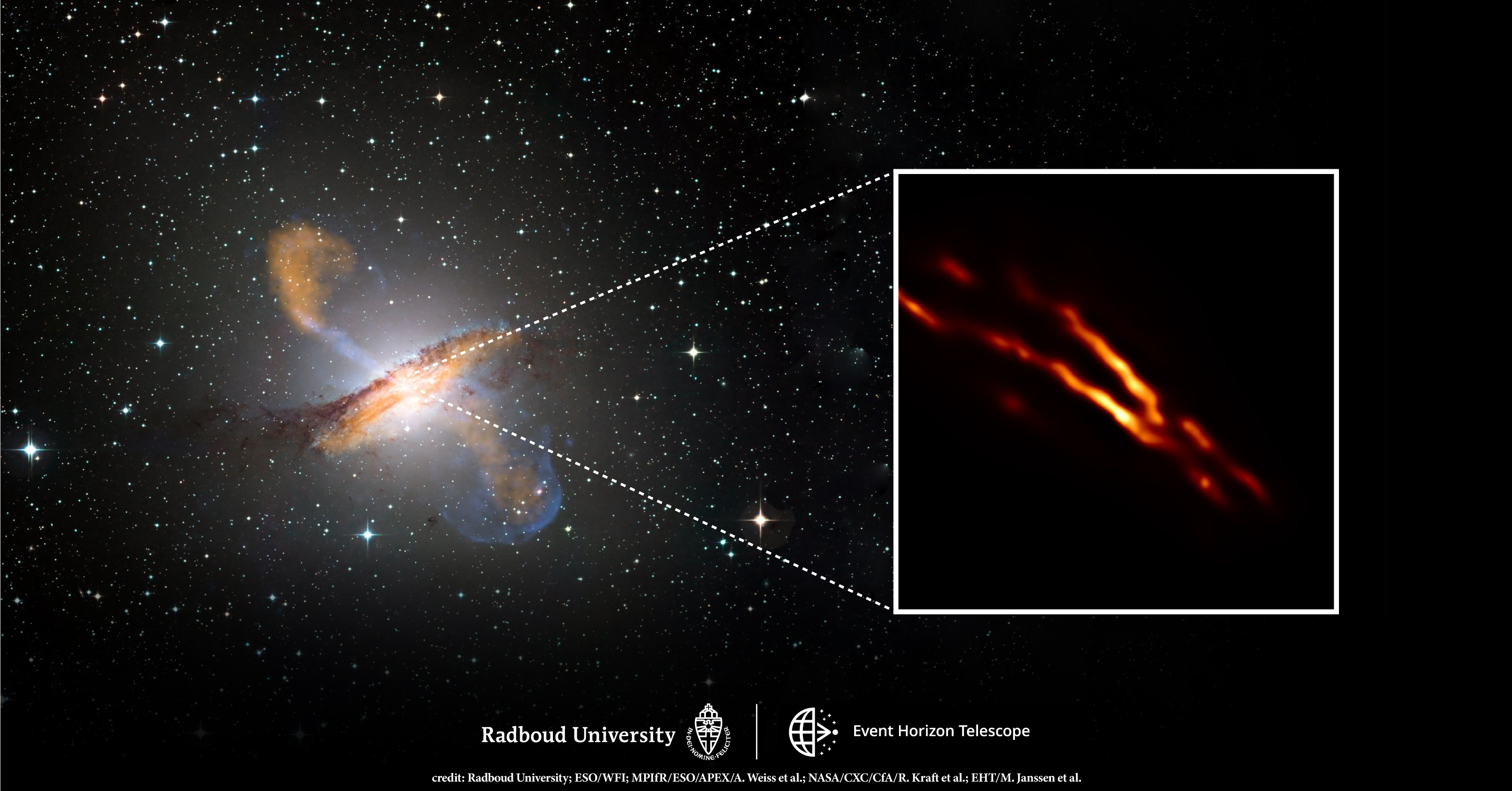 At radio wavelengths, Centaurus A emerges as one of the largest and brightest objects in the night sky. After it was identified as one of the first known extragalactic radio sources in 1949, Centaurus A has been studied extensively across the entire electromagnetic spectrum by a variety of radio, infrared, optical, X-ray, and gamma-ray observatories. At the center of Centaurus A lies a black hole with the mass of 55 million suns, which is right between the mass scales of the Messier 87 black hole (six and a half billion suns) and the one in the center of our own galaxy (about four million suns).

“The central supermassive black hole in Centaurus A has one of the largest angular diameters, which may be photographed with a next generation EHT array like the black hole images of M87,” Kazunori Akiyama, a research scientist at MIT Haystack Observatory, said. “It is a remarkable progress that the EHT has for the first time captured the detailed shape of its jet base formed by hot plasma just escaping from the black hole.”

Compared to all previous high-resolution observations, the jet launched in Centaurus A is imaged at a tenfold higher frequency and sixteen times sharper resolution. With the resolving power of the EHT, we can now link the vast scales of the source, which are as big as 16 times the angular diameter of the Moon on the sky, to their origin near the black hole in a region of merely the width of an apple on the Moon when projected on the sky. That is a magnification factor of one billion.

Supermassive black holes residing in the center of galaxies like Centaurus A are feeding off gas and dust that is attracted by their enormous gravitational pull. This process releases massive amounts of energy and the galaxy is said to become ‘active’. Most matter lying close to the edge of the black hole falls in. However, some of the surrounding particles escape moments before capture and are blown far out into space: Jets – one of the most mysterious and energetic features of galaxies – are born.

Astronomers have relied on different models of how matter behaves near the black hole to better understand this process. But they still do not know exactly how jets are launched from its central region and how they can extend over scales that are larger than their host galaxies without dispersing out. The EHT aims to resolve this mystery.

The new image shows that the jet launched by Centaurus A is brighter at the edges compared to the center. This phenomenon is known from other jets, but has never been seen so pronouncedly before. “Now we are able to rule out theoretical jet models that are unable to reproduce this edge-brightening. It’s a striking feature that will help us better understand jets produced by black holes”, says Matthias Kadler, TANAMI leader and professor for astrophysics at the University of Würzburg in Germany.

We can investigate how the downstream of the jet observed with EHT connects to the outer jet with the East Asian VLBI Network consisting of radio telescopes from Japan, the Republic of Korea, and China. Fumie Tazaki, an EHT member and a Research Affiliate at the National Astronomical Observatory of Japan, said, "In order to investigate the jet of Centaurus A in the southern sky in detail, it is very important to observe it by connecting the East Asian VLBI Network and the radio telescope of Tidbinbilla, Australia. We aim to elucidate the mechanism of jet ejection and acceleration through cooperative play between EHT, East Asia and Australia."

With the new EHT observations of the CentaurusA jet, the likely location of the black hole has been identified at the launching point of the jet. Based on this location, the researchers predict that future observations at an even shorter wavelength and higher resolution would be able to photograph the central black hole of Centaurus A. This will require the use of space-based satellite observatories.

“These data are from the same observing campaign that delivered the famous image of the black hole in M87. The new results show that the EHT provides a treasure trove of data on the rich variety of black holes and there is still more to come”, says Heino Falcke, EHT board member and professor for Astrophysics at Radboud University.

To observe the Centaurus A galaxy with this unprecedentedly sharp resolution at a wavelength of 1.3 mm, the EHT collaboration used Very Long Baseline Interferometry (VLBI), the same technique with which the famous image of the black hole in M87 was made. An alliance of eight telescopes around the world joined together to create the virtual Earth-sized Event Horizon Telescope. The EHT collaboration involves more than 300 researchers from Africa, Asia, Europe, North and South America.

TANAMI (Tracking Active Galactic Nuclei with Austral Milliarcsecond Interferometry) is a multiwavelength program to monitor relativistic jets in active galactic nuclei of the Southern Sky. This program has been monitoring Centaurus A with VLBI at centimeter-wavelengths since the mid 2000s. The TANAMI array consists of nine radio telescopes located on four continents observing at wavelengths of 4 cm and 1.3 cm. 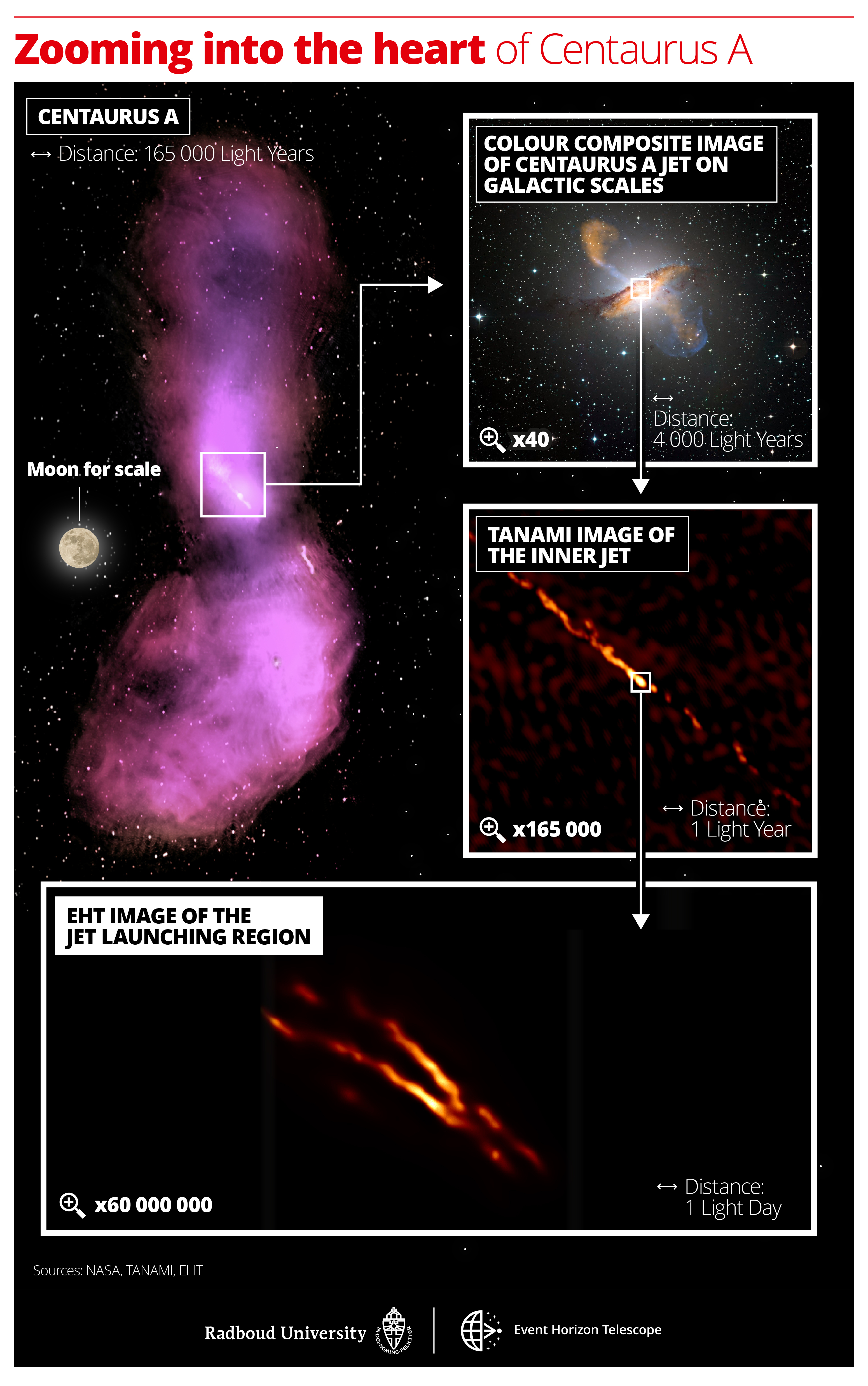 Caption: Distance scales uncovered in the Centaurus A jet. The top left image shows how the jet disperses into gas clouds that emit radio waves, captured by the ATCA and Parkes observatories. The top right panel displays a color composite image, with a 40x zoom compared to the first panel to match the size of the galaxy itself. Submillimeter emission from the jet and dust in the galaxy measured by the LABOCA/APEX instrument is shown in orange. X-ray emission from the jet measured by the Chandra spacecraft is shown in blue. Visible white light from the stars in the galaxy has been captured by the MPG/ESO 2.2-metre telescope. The next panel below shows a 165000x zoom image of the inner radio jet obtained with the TANAMI telescopes. The bottom panel depicts the new highest resolution image of the jet launching region obtained with the EHT at millimeter wavelengths with a 60000000x zoom in telescope resolution. Indicated scale bars are shown in light years and light days. One light year is equal to the distance that light travels within one year: about nine trillion kilometers. In comparison, the distance to the nearest-known star from our Sun is approximately four light years. One light day is equal to the distance that light travels within one day: about six times the distance between the Sun and Neptune. Credit: Radboud University; CSIRO/ATNF/I.Feain et al., R.Morganti et al., N.Junkes et al.; ESO/WFI; MPIfR/ESO/APEX/A. Weiss et al.; NASA/CXC/CfA/R. Kraft et al.; TANAMI/C. Mueller et al.; EHT/M. Janssen et al. 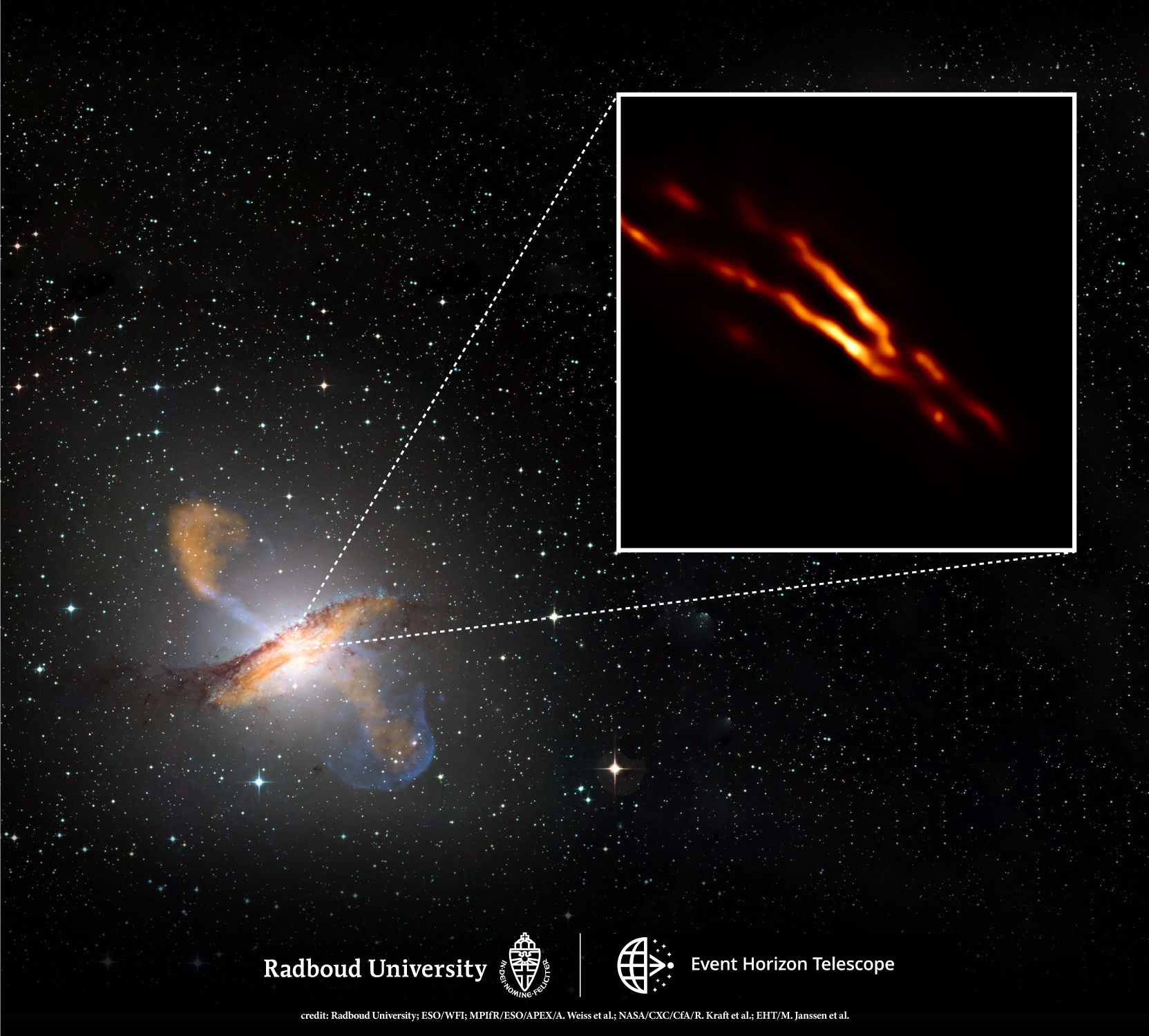 The official EHT publication "Event Horizon Telescope observations of the jet launching and collimation zone in Centaurus A" will be published by the Nature Astronomy journal (reference NATASTRON-21014047A) on on July 19th.