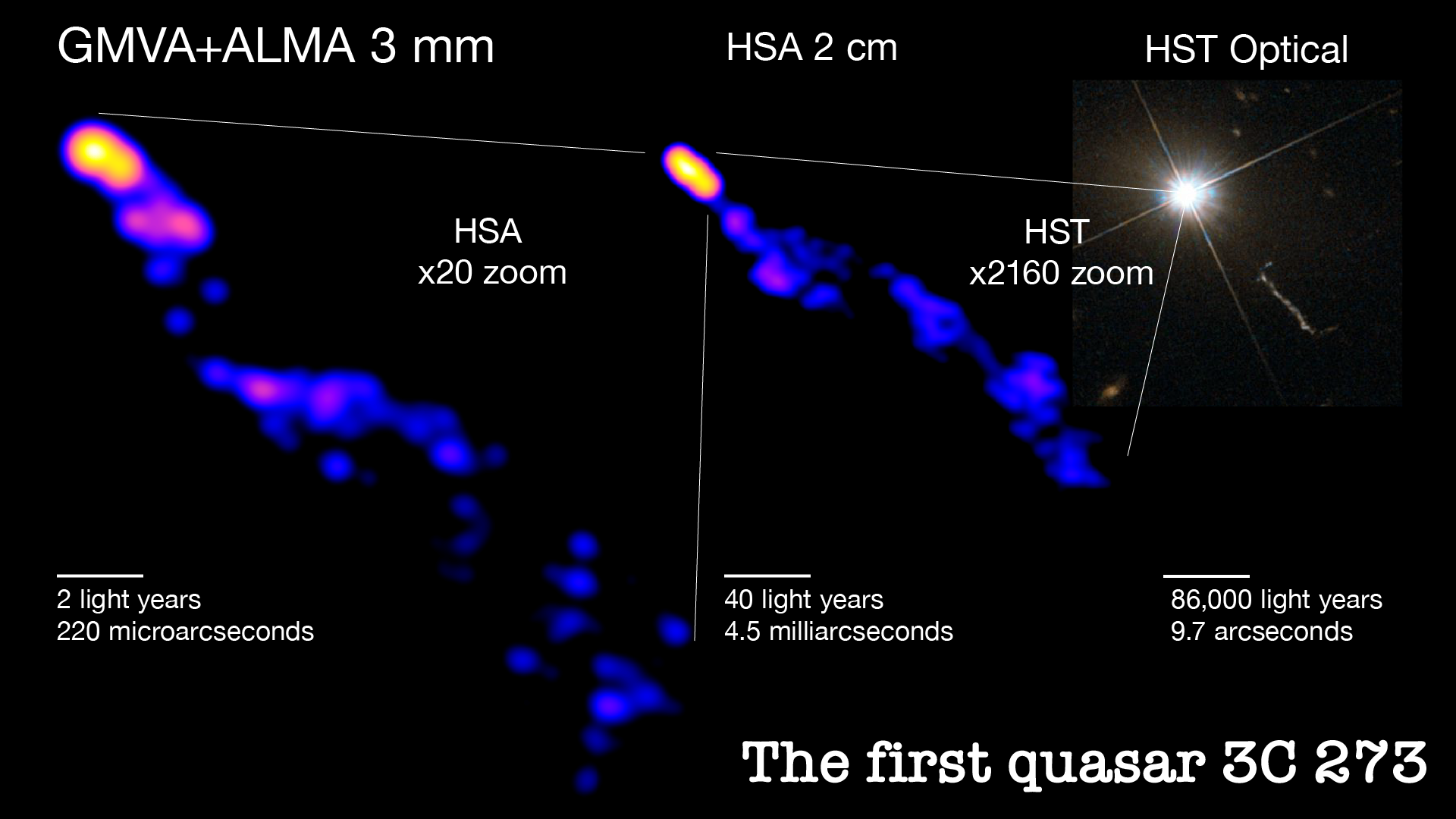 An international group of scientists has published new observations of the first quasar ever identified — the one labeled 3C 273, located in the Virgo constellation – that show the innermost, deepest parts of the quasar’s prominent plasma jet.

Active supermassive black holes emit narrow, incredibly powerful jets of plasma that escape at nearly the speed of light. These jets have been studied over many decades, yet their formation process is still a mystery to astronomers and astrophysicists. An unresolved issue has been how and where the jets are collimated, or concentrated into a narrow beam, which allows them to extend to extreme distances beyond their host galaxy and even affect galactic evolution. These new observations are thus far the deepest into the heart of a black hole, where the plasma flow is collimated into a narrow beam.

This new study, published today in The Astrophysical Journal (Okino et al., 2022), includes observations of the 3C 273 jet at the highest angular resolution to date, obtaining data for the innermost portion of the jet, close to the central black hole. The ground-breaking work was made possible by using a closely coordinated set of radio antennas around the globe, a combination of the Global Millimeter VLBI Array (GMVA) and the Atacama Large Millimeter/submillimeter Array (ALMA) in Chile. Coordinated observations were also made with the High Sensitivity Array (HSA) to study 3C 273 on different scales, in order to also measure the global shape of the jet. The data in this study were collected in 2017, around the same time that the Event Horizon Telescope (EHT) observations revealed the first images of a black hole.

“3C 273 has been studied for decades as the ideal closest laboratory for quasar jets,” says Hiroki Okino, lead author of this paper and a PhD student at the University of Tokyo and National Astronomical Observatory of Japan. “However, even though the quasar is a close neighbor, until recently, we didn’t have an eye sharp enough to see where this narrow powerful flow of plasma is shaped.”

The image of the 3C 273 jet gives scientists the very first view of the innermost part of the jet in a quasar, where the collimation or narrowing of the beam occurs. The team further found that the angle of the plasma stream flowing from the black hole is tightened up over a very long distance. This narrowing part of the jet continues incredibly far, well beyond the area where the black hole’s gravity rules.

“It is striking to see that the shape of the powerful stream is slowly formed over a long distance in an extremely active quasar. This has also been discovered nearby in much fainter and less active supermassive black holes,” says Kazunori Akiyama, research scientist at MIT Haystack Observatory and project lead. “The results pose a new question: how does the jet collimation happen so consistently across such varied black hole systems?”

The new, incredibly sharp images of the 3C 273 jet were made possible by the inclusion of the ALMA array. The GMVA and ALMA were connected across continents using a technique called very long baseline interferometry (VLBI) to obtain highly detailed information about distant astronomical sources. The remarkable VLBI capability of ALMA was enabled by the ALMA Phasing Project (APP) team. The international APP team, led by MIT Haystack Observatory, developed the hardware and software to turn ALMA, an array of 66 telescopes, into the world’s most sensitive astronomical interferometry station. Collecting data at these wavelengths greatly increases the resolution and sensitivity of the array. This capability was fundamental to the EHT’s black hole imaging work as well.

“The ability to use ALMA as part of global VLBI networks has been a complete game-changer for black hole science,” says Lynn Matthews, Haystack principal research scientist and commissioning scientist for the APP. “It enabled us to obtain the first-ever images of supermassive black holes, and now it is helping us to see for the first time incredible new details about how black holes power their jets.”

This study opens the door to further exploration of jet collimation processes in other types of black holes. Data obtained at higher frequencies, such as 230 and 345 GHz with the EHT, will allow scientists to observe even finer details within quasars and other black holes.

“ALMA, significantly contributed by NAOJ, played a vital role in this study. Furthermore, data analysis software packages, developed by the Japanese EHT team involving Mizusawa VLBI Observatory, were a key integral part of these remarkable results.”, says Mareki Honma, the director of NAOJ Mizusawa VLBI Observatory and a core member of this international team who leads the Japanese EHT efforts. “We look forward to further advance in such observational studies that fully leverage an extremely high resolution to reveal the unknown nature of the jets in various black hole objects.” 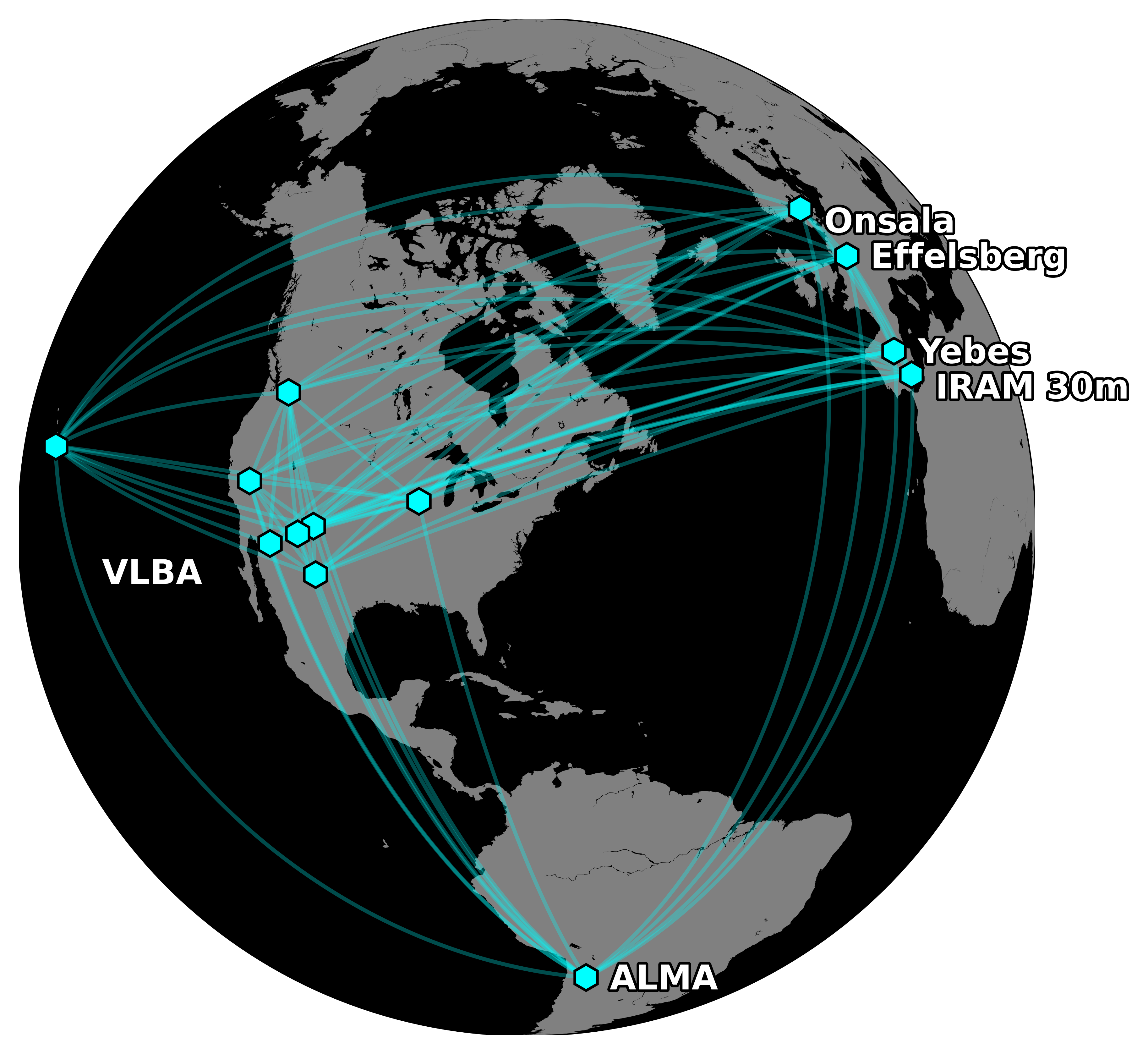 The GMVA observes at the 3mm wavelength, using the following stations for this research in April 2017: eight antennas of Very Long Baseline Array (VLBA), the Effelsberg 100m Radio Telescope of the Max-Planck-Institut für Radioastronomie (MPIfR), the IRAM 30m Telescope, the 20m telescope of the Onsala Space Observatory, and the 40m Radio Telescope of Yebes Observatory. The data were correlated at the DiFX VLBI correlator at the MPIfR in Bonn, Germany.

ALMA is a partnership of European Southern Observatory (ESO, representing its member states), NSF (USA), and NINS (Japan), together with NRC (Canada), MOST and ASIAA (Taiwan), and KASI (Republic of Korea), in cooperation with the Republic of Chile. The Joint ALMA Observatory is operated by ESO, AUI/NRAO, and NAOJ. This paper makes use of the following ALMA data: ADS/JAO.ALMA2016.1.01216.V.

About the APP Project

The VLBA is an instrument of the National Radio Astronomy Observatory.

The National Radio Astronomy Observatory is a facility of the National Science Foundation operated under cooperative agreement by Associated Universities, Inc.