ILOM (In-situ Lunar Orientation Measurements) is a project which aims at observations of the rotational fluctuations of the Moon from positioning of stars by a small telescope on the Moon. The main target is to know the interior of the Moon, especially to know whether there is a liquid core or not, by observing the rotational fluctuations for longer than 1 year with the accuracy better than 1 milli-second of arc (1/1000 of 1 arc second ).

The telescope used for ILOM is PZT (Photographic Zenith Tube) which has experiences of observations of the latitude variations of the Earth, and has a 10 cm caliber and 1 m of the focal length.

We must measure the position of the stellar image with the precision of 1/1,000 of 1 pixel if we use a CCD with pixels of 5 μm by 5μm, since stellar position of 1 milliseconds of arc corresponds to 5nm on the focal plane. And we need to observe stars of magnitude of 12 or less for longer than about 40 seconds in order to attain such a precision.

The influence on the rotation, however, will be very small because the lunar core is thought to be much smaller compared with the Earth. The inclination of the rotation axis is estimated to be from a few milliseconds of arc (mas) to tens of milliseconds of arc. Therefore, very high-precision observation higher than 1 mas is necessary for observations of such phenomena.

PZT is equipped with a mercury pool at the middle point of the focal length of the objective as a horizontal reflecting surface. Because the mercury surface is always keeping a horizontal plane even if the telescope itself declines, the light of the star which comes from the same direction focuses into an image always at the same point on the focal plane beneath the objective. Therefore, the position of the image recorded on a CCD which is fixed on the objective does not change.

One of the most important technical problems is to develop a telescope which is hardly affected by the large temperature change on the Moon.  It is under development in cooperation with JASMINE project of NAOJ, and there is a prospect to reduce the thermal effects by two ways. One is to adopt a diffractive lens made of synthetic silica with small coefficient of thermal expansion as an achromatic lens instead of a conventional one with large coefficient. Another is to discriminate the characteristic patterns in the shifts of star images by thermal expansion from those by the lunar rotation, and correct for the thermal effects using a simple model.

To keep the tube vertical on the surface of the moon in a vacuum and in a dusty condition, and to keep the mercury surface clean for a long time are also important problems. Attitude control system of the tube was developed in cooperation with Iwate University and it can make the tube vertical within an error of 0.006 degrees (about 20 arc-seconds), which is within the permissible range for the measurement of 1 mas accuracy. Performance of the mechanical system on the Moon is evaluated by thermal vacuum test, and there is no serious problem hitherto. As to the mercury pool, we evaluated it by measuring the roughness of the mercury surface in slightly tilted and vibrational conditions as well as in a still state.

After the developments we will complete a prototype and will evaluate the general performance of the telescope from observation of stars on the ground. 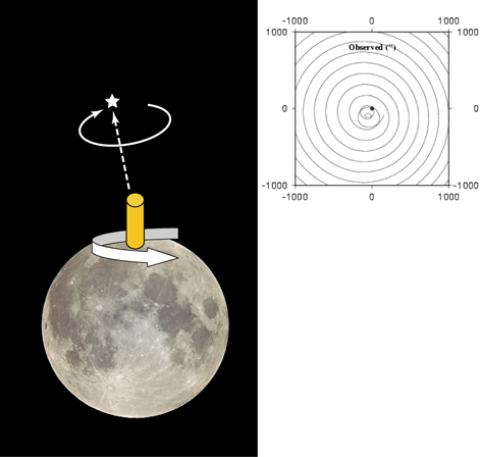 observation of stars on the Moon 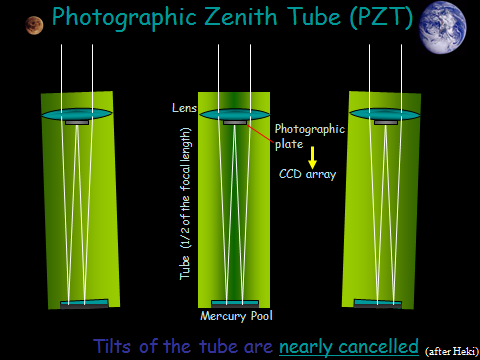 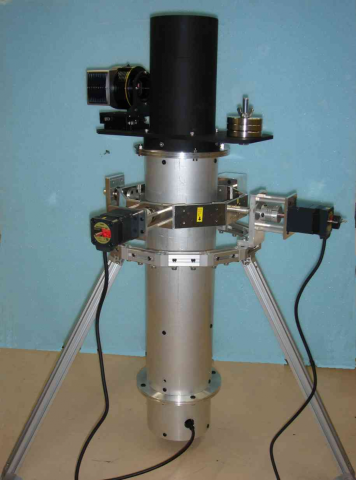 A bread-board model of the telescope