The internal structure of a celestial body provides important clue to understand its origin and evolution. In case of the Moon, the internal structure has been to some extent estimated from Apollo seismic data, but there is scant information about the structure below 1000 km depth. It is important to know whether the Moon possesses a core, and if it exists, to know its status (solid or liquid), size, and density. Some geodetic observations will help us understand the internal structure. For example, the gravity field and moments of inertia depend on the density profile of the celestial body. By observing the temporal change in gravity due to tidal force, we can estimate the tidal Love number k2 which indicates how rigid the body is. Because a celestial body with a liquid core is more deformable than one with a solid core, it is expected to infer the status of the core by observing k2.

Although the SELENE mission has revealed the far-side gravity feature better than before, still not enough is the accuracy of the long-wavelength component of the gravity field (low-degree gravity coefficients) which has information on deep interior. We aim at, in SELENE-2 mission, improving the low-degree gravity coefficients and tidal Love number k2 through precision orbit determination of the orbiter in reference to the lunar lander by differential VLBI observation between the two spacecraft. The differential VLBI is an observation technique to reduce the error stemming from fluctuation of atmosphere and ionosphere by taking double difference of the ranges between two transmitters and two receiving stations. We aim at improving gravity estimation by applying this observation technique which has been proved to be effective in precision orbit determination by SELENE VRAD mission.

The temperature on the lunar surface drastically changes from -180℃ in the night time to +120℃ in the daytime, both of which lasts about two weeks. We are currently developing antenna system which gives required performance under such a severe condition. We are also studying the way to reduce the power consumed in the radio source, as well as the method to infer the lunar internal structure by combining the gravity data with LLR (Lunar Laser Ranging) data and lunar seismic data. 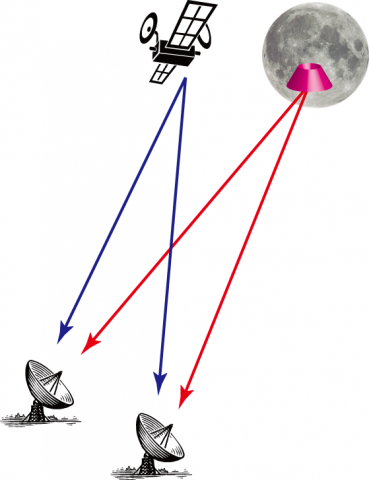